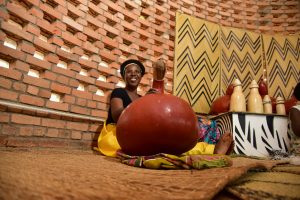 While visiting the Urugo Women’s Opportunity Center, my hosts taught me how to churn milk. Churning milk was a common household chore in traditional Rwandan societies. Through churning, cooking oil is extracted from fermented milk, popularly known as ikivuguto.

A long time ago, ikivuguto oil was also a common skincare product. Butter is still an important ingredient of skin lotions but modern brands lack the enrichment of the organic milk by-product processed the traditional way.

It would take up to four days to complete the process of fermentation and produce ikivuguto. When ready, ikivuguto would be poured into igisabo which is a roundish, thin-necked container. Churning is done by shaking igisabo gently and carefully to stir its content while releasing built-in pressure gradually. This is usually done while singing. Singing brings joy to household chores and other tasks. A song is also an important motivational tool. When sang by a group of people working together, it creates cohesion and enhances teamwork.

When oil is separated from ikivuguto, it is kept in rweso, a bowl-like utensil. As mentioned earlier, this oil is used for cooking. It is also the secret behind my grand mother’s perfectly nourished skin.

The first step in the supply chain of this type of oil is milking the cow. Fresh milk is handed over to the woman who takes care of this highly perishable beverage. In the Rwandan king’s court, there used to be a virgin girl who was in charge of handling mwami’s milk. Artistically crafted utensils of all sizes and shapes, bearing distinct Kinyarwanda names, adorned her neatly kept hut.

History portrays Rwandan women as highly skilled artisans. The quality of their hand-made appliances speaks volumes. The standard of their home-made artifacts says a lot about their skill sets. Traditionally, the skills development aspect was part of our informal education but somewhere down the line, we failed to capitalize on the foundation of vocational training built by the past generations.

Cultural experiences were suspended in March due to the coronavirus pandemic. Until the center is fully reopened, all we can do is reminisce and long for the good old days.