On our way to Akagera, we had breakfast at Urugo Restaurant 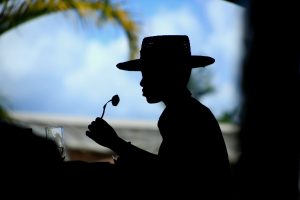 I visited Akagera National Park with a small group of fellow adventurers. We left Kigali at 5 in the morning and had breakfast at the Urugo Women’s Opportunity Center in Kayonza District. Having placed our orders the day before, Urugo Restaurant served us breakfast early and packed our takeaway lunch.

Usually, there are animals roaming around the park’s reception area at 6 in the morning. That is not always the case at 7 when we finally made it to the southern gate.

Upon arrival, we bought permits, got briefed and hit the trail. We pursued the eastern route and drove along Lake Ihema’s stunning shoreline. There are ten lakes within the park, Ihema being the biggest one. It is also the second biggest lake in Rwanda behind Lake Kivu. Kagera River meanders on the other side of the lake, forming the Rwanda – Tanzania boundary line.

It was cloudy in the morning and sunny in the afternoon but average temperature was moderate throughout the day. Vegetation cover looked greener than your average Savannah. Part of the trail was muddy and slippery but navigable nevertheless. However, you need a 4WD vehicle that is in a good condition.

Before embarking on a self-drive experiment, check the tread depth of your car. The treads shouldn’t be worn out. Your front and rear wiper blades must be working smoothly. Detect any possible air conditioner malfunctions and fix them before departure. At some point, you will probably need to roll up your windows. There is a stretch which is home to numerous tsetse flies. According to the park warden who briefed us, the tsetse flies don’t pose any health risks but they sting and it hurts. It is advisable to apply repellents on your skin.

We opted to have this experience without a guide. The map we had bought gave us very clear directions. Besides, there were other vehicles in front of us. Getting lost wasn’t a concern whatsoever. I have to admit though, we would have learned more about Akagera’s wildlife from the guide. Hiring one is highly recommended.

Apart from a variety of bird species, we didn’t see much during the first one hour or so. However, we saw signs of the presence of animals not long before our arrival. Fresh animal dung, traces and footsteps were more visible than the ruts left behind by the tyres of the safari cars we were tailing. We should have been there earlier. Next time, we will drive to Kayonza the day before and spend the night at Urugo Ecolodge. This itinerary will enable us to add a cultural experience and make it easier for us to start the game drive at 6 a.m.

The first non-flying animal we saw was an elephant covered in mud. From time to time, elephants and other animals roll over muddy puddles repeatedly. Wallowing in the mud has a cooling effect. It regulates the temperature of their bodies.

We ate our sandwiches at the lakeside picnic area. During the lunch break, we spent some time looking at hippos popping their noses from the water and crocodiles basking in the tender sun. To have a good look at these scary animals, you need a powerful pair of binoculars. Don’t ever get too close to the lake.

More animals were on the northern side of the park. The second half of the ride was slower because we spent a lot of time gazing at animals of all shapes and sizes. Giraffes, zebras, warthogs and a dozen species of antelopes were hanging out in groups. They took their time moving from one side of the trail to another. Beware, animals cross the road at their own pace. No one has ever instructed them to look right, left and right again before crossing. Expect the antelopes, warthogs and the fast and furious predators to appear out of nowhere.

Animals are free to traverse the road as they wish. When we found a group of primates conducting a meeting in the middle of the road, we waited patiently. Those who were behind us did the same. Gradually, a line of gas-guzzlers was growing longer behind us. It looked like we were stuck in rush hour traffic. When you find yourself in a similar situation, don’t honk. Do not blast loud music either. Wild animals hate noise pollution. Besides, you don’t have any rights to disturb the bona fide residents of the park, especially when they are in an important meeting.