Learning the art of pounding and grinding sorghum 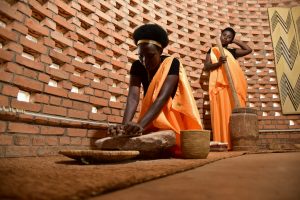 Food and beverages have sparked our celebrations for centuries, thanks to sorghum — the crop from which both are processed. Historically, sorghum is credited for making every Umuganura festival memorable.

While visiting Ndego Sector in Kayonza District, I rolled up my sleeves and learned how to harvest sorghum. Tracing the genesis of the main ingredient of my favorite porridge was a very fulfilling experience. Unlike many other grains, sorghum is gluten-free. It is one of the top five most popular grain crops in the world. Its final products vary from region to region. In Rwanda, sorghum is often milled to produce fine flour used to prepare meals and beer.

The opportunity to harvest sorghum came more than a year after learning how to grind the grain, courtesy of the Urugo Women’s Opportunity Center. Traditionally, grinding sorghum was a common household chore among women. It was therefore befitting to learn from women. The first step in processing sorghum involves removing the fibrous outer layer of the grain, known as bran. This is usually done through pounding. In most cases, the grain is moistened before the pounding begins. In this part of the world, wooden pestles and mortars are used to do the pounding.

Grinding, on the other hand, is powered by stones. The grain is placed on a large flat-surfaced stone and crushed by a smaller piece of the same material. Pounding is usually done while standing but grinding is done while kneeling down. Sorghum is rich in nutrients. It can be consumed as a staple food or a refreshment. It comes in different species, the most popular being the African bicolor.

Rwandan history depicts a nation boasting stable food security. However, a handful of prolonged dry seasons have been documented over the centuries. During the ensuing famines, our ancestors turned to the drought-resistant sorghum crop.